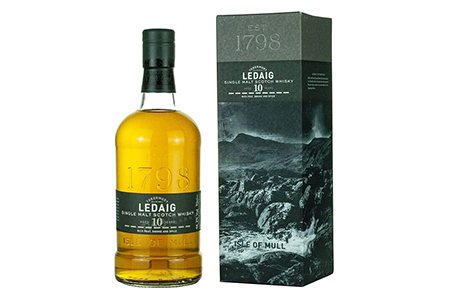 A world renowned single malt as unique as this deserves to be held in a bottle with real character. The specially selected glass proudly embraces the past; paying homage to the distinctive old green bottle and referencing some of the qualities of the historic Tobermory packaging.

The bottle is presented in a quality gift carton.

Tobermory is a distillery located in the town of Tobermory on the Isle of Mull.

Positioned geographically between Islay and the Isle of Skye, it shares taste elements with both the peaty Islay malts and the rocky, salty malt of Talisker. I think it bears the most resemblance, however, to the Campbeltown distillery of Springbank.

The distillery, like many, has had a rocky history during which it suffered many closures and re-openings. It was briefly renamed as Ledaig distillery in the 1970s.

The name Tobermory also adorned bottlings of a blended scotch, and later a vatted malt, before finally being bottled as a single malt in 1989.

Tobermory Ledaig 10 Yo is mildly peated, but only because of the water that runs over peat bogs above the distillery. Tobermory uses unpeated malt. However, the distillery also produces a heavily-peated malt named Ledaig.

Ledaig’s heavy peat character is derived from both the peated water and peated malt.

Nose: Yeasty and robust, with some dark, mushroomy peat and smoldering coals over a layer of butterscotchy malt. The peat has an oily, industrial quality not unlike Springbank.

A rest in the glass reveals some elements of bourbon cask aging –  caramel and vanilla.

Palate: Medium bodied. Even tongue burn, with a nice balance of alcohol to malty sweetness at 46.3% ABV. Here the malt sugars emerge in the form of burnt caramel and assorted cereal notes, although the peat becomes a bit muddy.

Finish: Long and peaty, but in an earthy way. More caramel, vanilla and barrel char. Not particularly bitter, although the  fade-out leaves some ashy, asphalt notes.

This is akin to 10 year-old Springbank in many ways – from the earthy “not quite smokey” peat, to the industrial oily notes, and the emphasis on barrel char. I think I prefer Springbank for its clearer malt character and eclectic complexity.

Still, this “poor man’s Springbank” isn’t bad for the price, and I think the choice of bottling at 46.3% ABV is spot-on.

The earthy, mushroomy quality of peated whisky is clear despite only coming from the water, although it is less prominent than in a fully peated whisky, such as those from Islay.

There isn’t a lot of reason to recommend this 10 year-old.

It has been said that Tobermory and Ledaig are better suited to long aging, and that the 20+ year-old bottlings are refined and complex.

It thus may be worthwhile skipping Tobermory Ledaig 10 unless you particularly like the oily/mildly peated style and are looking for alternatives to Springbank.