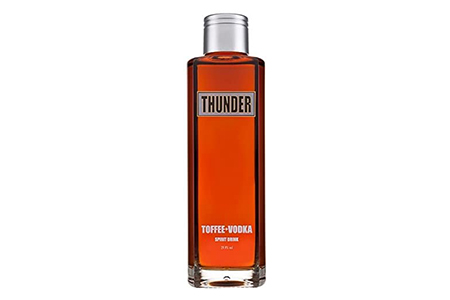 Thunder Toffee Vodka originates from the slopes of the French ski resort of Val D’isere, an area well known for experimental mixes of toffee and vodka. After years of experimentation the perfect blend has been created.

Vodka Thunder Toffee has captured the balance of the sweetness of the toffee flavour without losing the elements which make a good vodka.

Toffee Thunder Vodka is all about style and simplicity of taste.

It is the only Toffee Vodka on the market entirely free from additives and preservatives, and is made from triple distilled premium vodka and natural toffee syrup.

This is one of those drinks whose beauty is in its simplicity.

Thunder Toffee is a flavored vodka with style and elegance that can satisfy everyone with it’s creamy sweet toffee syrup followed by the heat of the pure triple distilled vodka, it has a unique taste that is simply delicious.

Free from any additives or preservatives,it is made from triple distilled grain vodka and completely natural toffee syrup.

This flavored vodka is strong enough on ABV 40 % yet not too sweet-so satisfying both the male and female palate.

Darkly caramel colored beauty is best served as cold as possible as a shot or simply over ice.

This is what makes it so perfect and refreshing for the summer months. It is sweet enough to satisfy both the male and female palate and is also great as a long drink mixed with ice, lemonade or even coke.

A great mixer for cocktails as well makes this London bottled concoction an absolute must try.

Thunder Toffee is award-winning, achieving a gold medal in 2009 for flavored spirit, gold awards for 2010 and 2011 and finally Thunder has been awarded with a great taste gold award in 2012.

The next few years promise to be a huge success for this drink!