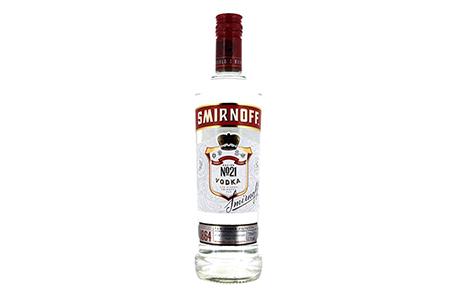 Smirnoff is a ubiquitous name in the vodka world. This isn’t just because of huge ad campaigns, but because Smirnoff (the brand) has product available in so many different flavors and proofs.

The vodka is in virtually every bar in the US (at least every one I’ve been to). Smirnoff Red Label Vodka is also pretty affordable.

Ten Times filtered in a unique process for ultimate clarity, making it perfect for use in cocktails and mixed drinks.

Recipe comes from Russia (hence the country designation above), but, according to the bottle, it’s made in the United States.

I’m not sure what to make of that in regard to this review , but those seem to be the fact.

Smirnoff Red Label is also known as Smirnoff No. 21. I chose to call it by Red Label, as I feel that is more common nomenclature.

The shot opens with no clear flavors, bitter or otherwise.

As I let my tongue marinate in the shot, I notice the feeling of having the moisture sucked from my mouth. This is typical of some cheaper vodkas (e.g. Skol or Aristocrat), though Smirnoff is nowhere near as bad.

Upon swallowing, the burn is obvious and the bitter flavors come out in spades.

This vodka requires a chaser. Diet Mountain Dew is my favorite chaser, but it isn’t doing a great job of taking out the flavors.

For Smirnoff, the mixer is Passion Fruit juice.

The mix is bitter. In a club or bar, given the lower price compared to high quality vodkas, I certainly feel like Smirnoff would suffice.

However, drinking in the comfort of my home or in a calm environment where I can reflect on the drink, Smirnoff is barely acceptable. It isn’t a fun vodka to drink, but it would get by in a pinch.

Smirnoff is a great bottom shelf vodka, but doesn’t make the cut when it comes to casual drinking. If you’re in a club and you don’t want to shell out for Stoli, Smirnoff Red Label Vodka is your man.