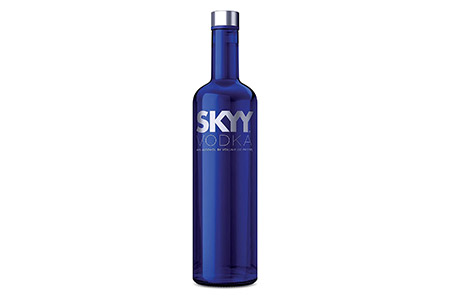 Production of Skyy Vodka started in San Francisco in 1992 in a small start up company.

Skyy Vodka contains the least impurities among the major brands and is the leading domestic premium vodka in the United States.

SKYY vodka is originally manufactured by the Campari America division of Campari Group of Milan, Italy, formerly SKYY Spirits LLC. This brand of Vodka is 40% ABV or 80 proof; Skyy 90 Vodka is a 90 proof premium brand aimed at martini drinkers, as well as flavored SKYY being 70 proof.

Brand creator, Maurice Kanbar, claims the vodka is nearly congener-free due to its distillation process. The bottle is a cobalt blue with a plastic label. In year 2008, Skyy Group expanded the SKYY Vodka line with five new flavors, referred to as Skyy Infusions.

Skyy Vodka is a fairly well known spirit that which a lot of people have enjoyed at one point or another.

Finding a good vodka for your vodka cocktails and vodka mixed drinks is important and you don’t want to waste your money at the club ordering sub par alcohol.

Skyy Vodka for sure is one of the more well known vodka brands around.

Classy blue cobalt bottle tends to stick out. It would be futile to convince common people to stay away from it, as it usually then next vodka people like to try after only drink Smirnoff.

Because of this, people swear by it and tend to think that it is actually a premium vodka.

Skyy is slightly smoother than Smirnoff, and tastes better than Absolut.

The formula for Skyy came from a chemist after inventing a new distillation technique that removes unwanted by-products that cause hangover and bad taste.

Skyy vodka taste is pure smoothness comparing to other vodkas from this class. There are very little hint of flavor, and basically no bitterness at all. Skyy seems to freeze well, making the liquid thick.

After swallows well with a slight burn on the way down. Skyy vodka aftertaste is a very soft bitterness, but it is somehow pleasant. At full chill, this is a good shooting vodka.This vodka shows its best side when you served it chilled and drink it before it starts to warm.

All the main qualities of Skyy go south fast when it loses the super-freeze. They call it super-premium. If it is, it’s on the lower end of the spectrum if it gets warm.