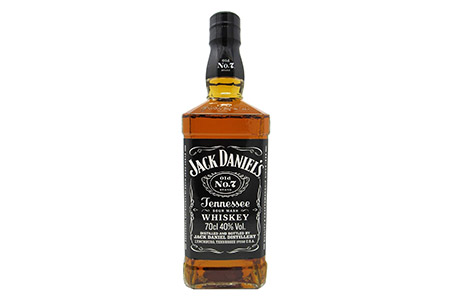 Jack Daniel has the oldest distillery in America. The Jack Daniels Black 7 Y.O. has been a popular brand for years.

It’s unique taste and smooth texture sets it apart from the traditional bourbon. Often recommended as the starter whiskey, even the most experienced drinkers have returned to JD Black-7 over the years. Simple taste has its charm.

Jack Daniels Black 7 Y.O. (JD Black-7) just say the words and each person has a different story about their Jack Daniel experience.  It is one of the oldest whiskies from America, and one of the most popular ones across the globe.

Owned by the Brown-Foreman Corporation since 1956, and been in production long before that (since the 1800s to be precise), Jack Daniel’s Whisky has held its own through the decades, aging beautifully.

The whiskey is produced to quality at the Jack Daniel’s distillery in Lynchburg, Tennessee. The old and trusted sour mash distillation process is used extensively; it uses material from an older batch to initiate the fermentation in the new whiskey (this is why the label of the Jack Daniels Black 7 Y.O. reads ‘sour mash whiskey’).

The secret which separates the 7 Y.O. Black and the other brands in the Jack Daniel’s catalogue from regular bourbon is the Charcoal Mellowing. Before the aging process of the whiskey is to begin, it is passed drop by drop through maple wood charcoal, then stored in barrels for aging.

It is this mellowing process which gives the whiskey its smooth texture and free flow not to mention a sweet maple after taste.

The Jack Daniel’s whiskey has been bagging awards since 1904, when it won the first gold medal at the World’s fair at St. Louis. Since then every few years the JD whiskey has been graced with an award or the other.

Gold medal at London in 1914, Certificate of the Institute of Hygiene from London in 1915, Star of Excellence at Brussels in 1954, another gold medal at Amsterdam in 1981 and many more. Jack Daniels has bagged a gold medal in pretty much every world fair it has entered.

So, what does the Jack Daniel’s Black 7 Y.O. taste like?

Common men connect the taste of JD Black-7 with so many different thinks. While a habitual taster calls it a non-complex drink, many recommend JD Black 7 Y.O. as an introduction to whiskey, the perfect drink for a new whiskey drinker.

It’s easy flow and straight forward flavors (The Common man would beg to differ here) make the JD Black-7 a very uninteresting drink for the tasters.