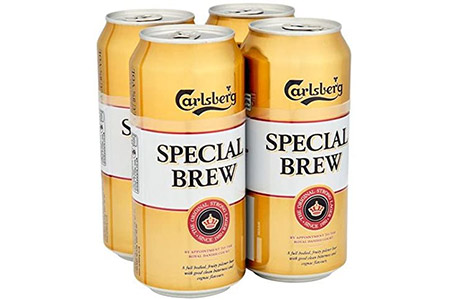 Carlsberg imperial lager has been around on a large market since 1970’s while holding the characteristic of being one of the strongest lagers ever since the production started.

Carlsberg prouds itself on its achievements with strong lagers so even with the recent industry crackdowns that requied manufacturers to either water down their strong lagers or bring the dosage down a notch, without a doubt, Carlsberg decided not to compromise the quality of this strong lager and picked the later.

Now you can find the bottles or cans of Special Brew in 440ml dosage in most places. First strong lager from Carlsberg was produced in 1950 to commemorate Churchill’s visit to Copenhagen while the special cognac aroma was added to reflect one of the favorite drinks Churchill liked to sample quite a few times in a row.

The design is easily recognizable: yellow can with the red-white ring in the middle along with a brand logo.

Proffesional and to the point. Carlsberg has remained consistent with thier brewing methods and you will notice the usual on the sign of ingredients: malted barley, hops, syrup and carbon dioxide. The extra aroma is contained in syrup which is added at a specific point during the brewing process.

Sweet and fruity aroma with a combination of a bitter dry aftertaste after the caramel-cognac flavor starts kicking in may be liked by some people, but it is often overlooked in favor of getting drunk for little money.

Still, if you compare it to other strong lagers, you will notice that the taste achieved is very specific in a good way even though it depends whether if it’s served cold or warm!

For best serving you should pour it in the steamed straight glass at at 6-8°C or if you like it really cold: 2-4°C. Without strong alcohol aroma that usually alerts people when drinking the common lagers the punch is felt really quickly, even after a can or two, so not many people can endure more than few cans before the flavor is the last thing they notice.

Hangovers are stronger than with usual lagers because of the higher alcohol content and higher dehydration rate, so unless you are 300 pound profesisonal strongman with family roots to André the Giant, drinking 8 of these is more than enough for anyone.