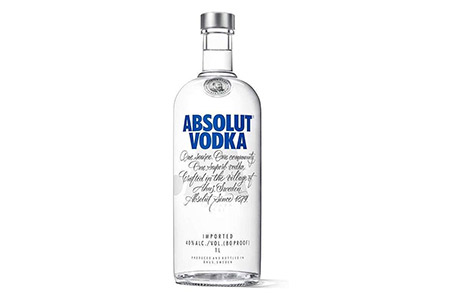 Brand of Absolut Vodka is widely known and widely spread vodka. Country of origin is Sweden, to be precise it cames from a little town called Ahus and since 1879 itrepresents the kind of very distinctive product for Sweden.

Founder of Absolut brand was Lars Olson Smith, whole his life he struggled for making this brand to world as recognizable product. All until his death in 1917 when he passed away in poverty.

In later years state was able to nationalize this brand, but today this brand is owned by French Group “Pernod Ricard” which currently sitting as the 3rd largest liquor distributor in the world and just brand name is estimated on several billion US Dollars.

And it is important to say that is made from natural ingredients and what is also important that sugar is not added during its production which makes it with fewer calories.

We cant simply ignore contribution of sculptors who created design of bottle which is unique brand of art, shown both on their bottle and at venues.

Absolut Vodka has come a long way, and it shows through the media and the recognition of their name by everyone.

Absolut vodka is a perfect choice for a lot of people as a Vodka Mixed Drinks and Vodka Cocktails.

Absolut Vodka will really light up your taste buds in mouth. At first it doesn’t have an unpleasant initial taste but it does have sort of disinfecting feeling on the tongue.

It is very noticeable going down and leaves a pretty harsh hard alcohol taste long after the drink is finished.

But if you look at the facts about Vodka Absolut , you’ll notice that each bottle is made with 2 lbs of winter wheat per 750ml bottle, which is quite a lot of wheat.

This fact is most probably the main reason why Vodka Absolut leaves such a strong taste in your mouth.

Conclusion made only to taste alone brings the fact that Absolut isn’t bad at all, but if you like a smooth and gentler vodka then there are better choices for you.

Absolut price may varies from 20 GBP to 35 GBP for one liter bottle (34 oz) which depends on the variants and countries.